Largely because of the pandemic, reliance on technology as a business differentiator has progressed in the past two years at a pace that would otherwise have taken a decade or more to reach. Customers are rapidly shifting their buying to ecommerce, supply chains are better managed with strong technology, staffing woes can often be addressed with automation and the list goes on.

In this article, we’ll dive into data from a 2022 NetSuite survey of 500 executives and managers from different companies for a 360-degree view of business challenges, solutions and manager reactions to executive actions.

The goals of this massive technology adoption are clear:

Finance teams now sit at the center of the digitalization movement, swiftly adopting technology for the team’s own use and helping to establish tech priorities and ROIs for teams throughout the company. Even as economic conditions roil, most companies say they’re expecting to grow this year, and in many cases, they’re planning to bring in even more technology.

For those who thought the economic environment couldn’t get more convoluted after 2021, 2022 is turning out to be a “hold my beer” moment. Soaring energy, food and housing costs have consumers on edge and are vexing many business sectors. And yet those factors aren’t necessarily negatively affecting all businesses, or at least they feel manageable.

In NetSuite’s survey, 71% of C-level respondents said that growth prospects now are better than they were six months ago, and just 5% said they are worse. Taken as a whole, respondents were slightly less positive than the C-level alone, but still, just 13% said things are worse now. 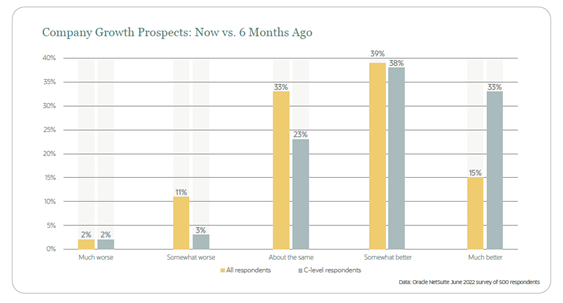 Similarly, the C-suite respondents are positive about revenue and earnings growth for their own companies. Only 8% see revenue decreasing versus 2021, and only 5% believe this year’s profits will be lower. Compare that with 22% who think profits will be up more than 10%, and it’s clear that business leaders expect to do well through 2022. The Richmond Fed survey found similar numbers: 2022 mean revenue growth expectations were up 9.3%. However, expectations for 2023 growth came in at 6.7%.

Regarding what to do with those increased earnings, the current economic environment matters. 72% of C-level executives expect better profits this year than last. In more certain times, this would call for a healthy increase in business reinvestment to keep that momentum going. However, with interest rates rising, the federal government is working to cool the economy and with a gloomier outlook for the broad economy, some of those new earnings are being banked.

It’s not that businesses aren’t planning to invest, but they’re doing so at a lower level than just three months ago. The chart below shows executive spending plans in eight areas tracked since December 2019. Last October, it looked like spending plans were heading back to 2019 norms—meaning spending increases in the 5%-10% range for most of the areas listed. That’s changed, with the average spending increase at or below 5% in each area. 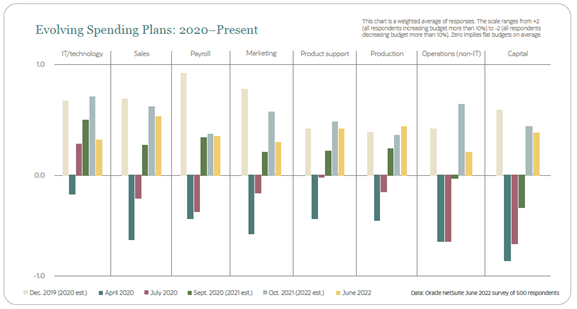 In most cases, finance and non-finance executives are aligned on spending increases, as are larger and smaller businesses. However, spending on non-IT, non-production operations is an exception. In that area, 19% of finance executives are looking to increase spending by 10% or more versus 5% of their non-finance counterparts. Two likely drivers are resources for finance itself and office reworking to accommodate return-to-office requirements.

Finance Steps Up in the Quest for Productivity and Efficiency

Thirty-six percent of managers report they’ve been asked to improve efficiency because of inflation. Finance execs were more likely to ask for efficiency gains than their peers. 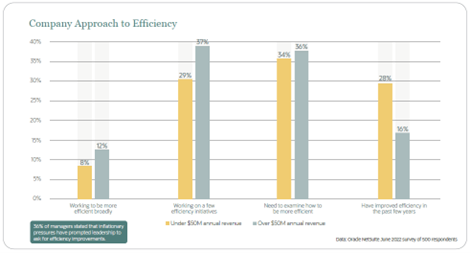 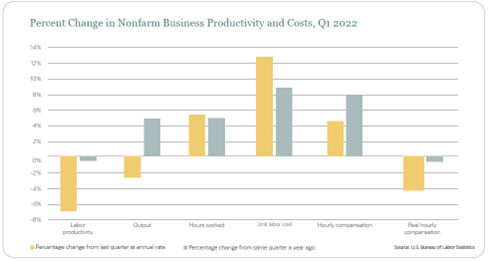 While the BLS reports that companies are paying workers more, workers are seeing a cut in real hourly compensation. That’s needed to manage inflation—but it won’t leave workers happy, and unhappiness contributes to lower productivity. Wacky supply chains present another challenge to productivity because workers can’t be productive if they don’t have the necessary materials at the right time to do their jobs.

Whether you look at worker output from a productivity or efficiency point of view, you’re likely to find challenges. Longer-term improvements usually come from better tools and automation—both of which imply capital spending, which may explain why capital spending is still on the increase. Finance has an increasingly large role to play in such technology acquisition.

While business leaders will see the advantage of any technology, they’ll have a harder time assessing the likely ROI of implementing it and the risk that the ROI won’t fully materialize. Finance has always had a role here. But with inflation, recession threats and changing customer desires in play, it’ll be harder to get ROI right, and therefore the process demands more of the finance team’s focus.

New Technologies Find Exec Support—But Which Are Most Practical?

Perhaps the biggest challenge for finance leaders through the pandemic period has been providing solid data to support decisions. Changes in supplies, workforce availability and demand have been for the most part unpredictable, and yet finance teams need to try and find meaningful data to support decisions. It’s no surprise executives outside of finance aren’t fully happy with the data available to them.

The chart below shows that there’s plenty of work to do in using data and technology effectively, but that’s not solely a pandemic artifact. In 2019, “using data effectively” was most cited as one of the finance team’s top four priorities (regardless of the respondent’s role, position or company size). Back then, more than 60% of both finance and non-finance executives included it in their top four annual goals for the finance team. 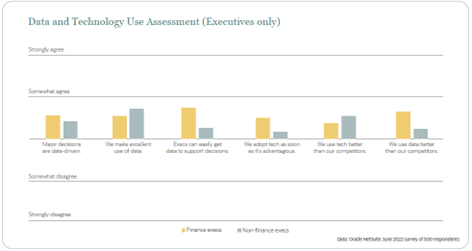 Data and Technology Use Assessment (Executives only)

Now the lack of reliable data to support decisions is even more of a challenge. In 2020, consumers worried about finding a roll of toilet paper; today they worry about finding a seat on a plane.

The swing between product demand and service demand might have been predictable, but the magnitude of the swings caught almost everyone by surprise. Then add in shipping snafus and fuel costs, and demand planning devolves into scenario planning for many companies. That’s a complicated job for finance teams, as it now requires closer coordination and monitoring of sales pipeline, operations and service/product delivery than at any time in the recent past.

It’s heartening that non-finance executives are most likely to say they’re able to make excellent use of data, even if they don’t feel that they easily get all the data they’d like. They seem to recognize that while data could be better, it’s still pretty good— a positive acknowledgment of the work finance teams and their leaders have done through the pandemic.

On average, non-finance executives are ambivalent about their company’s technology adoption. However, there’s a sizable disparity between how C-level executives feel about tech use versus their VPs and directors.

Forty-one percent of the C-suite strongly agree that their company adopts technology as soon as it’s advantageous, but only 18% of VPs and directors strongly agree. There’s likely a difference of opinion about when a technology becomes advantageous, and executives who approve the final purchase are logically more likely to think they’ve approved it at the right time.

At the pandemic’s outset, technology adoption and spending were a priority for many companies. Work-from-home tools and ecommerce became must-haves for many, which opened the door to broader consideration and adoption of technology. In this survey, NetSuite asked about 10 newer technologies spanning three business areas. At least half of executives said all 10 would be adopted within the next six months.

Automation saw the greatest interest, with at least 80% saying they already have or will implement automation for functions like accounting, sales, e-commerce, payroll and customer-facing functions (like self-checkout) within six months. Mobile devices are widely used in 30% of companies, and another half of executive respondents say they’ll use them within six months.

For finance teams, automation is a godsend for productivity, governance, efficiency and accuracy. In turn, it frees up the resources needed to improve strategic functions related to data analysis and financial planning and analysis (FP&A). As these technologies become the norm, lacking them will become a strategic disadvantage. 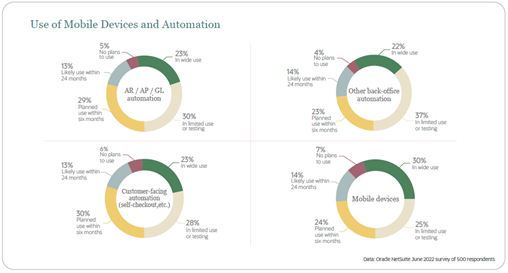 Use of Mobile Devices and Automation

About one-sixth of respondents are widely using AI and machine learning, and almost 30% more are testing these technologies. Surprisingly, using AI for analytics is just as common as using it for voice/language recognition and document digitization. The latter is common in chatbots, document processing and automated call attendants. AI for analytics is found in some business intelligence and dedicated analysis applications—but these tools require lots of data to be productive.

Even thousands of data points won’t be enough for a true AI system to provide insights. Predictive analytics do a better job when there’s too much data for human brains but not enough for artificial ones. When datasets run in the millions of data points with lots of new data regularly added, then AI will be the way to go. Note that not all BI systems use AI, and depending on the application, it may not be desirable for them to do so. Applying AI and machine learning (ML) to small data sets is the subject of research now, but it’s not a commercial reality yet.

Still, the promise of AI and ML for business is unmistakable when conditions are right. For finance teams, it’ll be important to understand the applicability of these technologies to their needs.

Use of Artificial Intelligence and Machine Learning

We’ll stick to discussing fintech and crypto’s advantages for payment purposes. In case you haven’t been watching CryptoTanks, if you had purchased $100 in bitcoin in November 2021, you’d have about $20.50 now. By contrast, had you put the $100 in S&P 500, you’d have about $80 now. 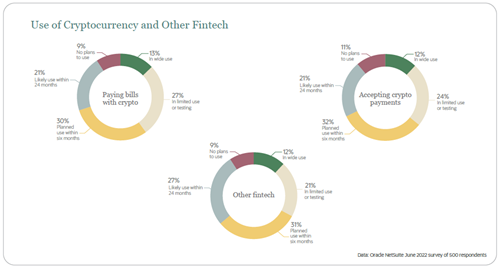 Use of Cryptocurrency and Other Fintech

The blockchain technology behind cryptocurrencies addresses many of the shortcomings of payment systems in current use. Blockchain’s distributed public ledgers mean transactions are easily verified, non-reputable and fast—and they should be cheap, as there aren’t any clearinghouse fees.

Currently, the big challenges are the volatility mentioned above and the challenge of moving money into and out of crypto quickly. Solve the volatility problem, and you’ve got a better payment system, which is why many central banks are exploring how to get in the game.

Finance teams should be watching and testing these systems. It’s likely that someday crypto will be how we pay for things—making it an option for accounts payable and receivable, which makes doing business with your company easier. However, it seems unlikely that 90% of businesses will be using these technologies within two years.

Technology is now table stakes in business, and the advanced technologies discussed here can spell a competitive advantage. We’re entering a time when there simply aren’t as many workers as there are job openings, so profitable growth will mean automating tasks.

Automation also comes with better, more reliable data in finance and other departments. The inherent timeliness and accuracy of that data is exactly what finance teams and business leaders need to make better decisions in a rough economy.

In terms of spending priorities, leaders are tapping the brakes as they watch the economy for signs of slowing and a possible recession. When it comes to adopting technology and implementing it to improve processes and collect better data, they’re looking to move full speed ahead. There’s a balance to strike, and those who get it right will be well-positioned for growth as the economy moves toward more stable times.

Our team has a deep bench of CPAs and consultants with expertise in NetSuite software and a variety of industries. If you’d like to learn whether NetSuite could be a fit for your organization, contact us online or give us a call at 410.685.5512 to schedule a demo.

Helping clients use technology to solve tough business issues is what drives Sharon. If she can save a business valuable time by automating a procedure or process, or help them use technology to produce useful information for decision-making, then Sharon feels that she’s done her job. Sharon specializes in NetSuite, Microsoft Dynamics GP and Sage 300Cloud ERP systems. In her spare time, she loves to cook and will gladly swap recipes with you.