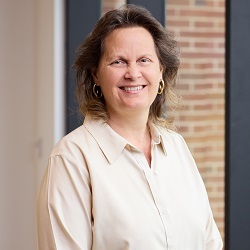 How to Unite Development and Finance Teams for Nonprofit Organizations

Different departments have different priorities. Misalignment between a nonprofit’s departments can wreak havoc in the board room and cause disruptions in key areas of the organization.

Integrating information is essential for your fundraising and finance teams to successfully align and contribute to your nonprofit’s mission, but it isn’t easy.

NetSuite is that single integrated solution. It provides a unified business management system to help you improve operations and grow your nonprofit’s mission.

Let’s consider this real-world scenario: it’s the first board meeting of the quarter and the development director has just completed her 2020 board report. She’s thrilled to announce that in the past year—through a combination of major donor contributions and grants—the fundraising team has raised over $5 million, exceeding their target by $250,000. Amazing! Well done! A fabulous year. She receives a round of applause from the room and walks back to her seat with a glow.

But then a troubled look from a new board member breaks the mood: “I’m looking at the statement of activities and it shows $4 million dollars in contributions for 2020. That’s a pretty big difference. What’s going on? What number is correct here? A $1 million difference is a pretty big deal.”

All eyes are on the report, and the development director jumps in to explain that she received a confirmed pledge from a major donor that should have been counted. The CFO responds that the pledge itself can’t be counted because in all reality, it wasn’t a pledge, it was a conditional gift—the donor pledged $750,000 to the capital campaign but only under the condition that the proposed building site go through an environmental impact report. “What? I’ve had multiple conversations with the donor and we both know that’s a formality!” Conversational mayhem ensues until the executive director steps in and promises to get a set of clarifying numbers within the week.

Was the development director overpromising? Or was the CFO a nitpicker underestimating dollars raised? No and no. The perspectives of the development director and the CFO reflect the ancient parable of a group of blind men who touch an elephant to understand what it looks like. Each individual traces just one body part and describes the elephant based on what they’ve touched: the man who feels the leg says the elephant is solid, like a pillar or the trunk of a tree; the man who handles the tail says the elephant is slender and bendable, like a rope. As each man truthfully describes the elephant, they find themselves in utter disagreement, defending their own positions and questioning the experience of the other men.

Finance and development each bring a unique perspective to an organization’s finances: not right, not wrong, but certainly different. And the numbers won’t necessarily match up even with tight operations in place.

The Root Cause: Fundraising Strategies vs. Accounting Regulations (GAAP and FASB)

The nonprofit CFO lives in a world of compliance and audits guided by generally accepted accounting principles (GAAP), an accounting industry framework that defines how money should be properly accounted for, spent and reported upon.

The Financial Accounting Standards Board (FASB) issued two Accounting Standard Updates (ASU’s) related to nonprofits. ASU No. 2016-14, Presentation of Financial Statements for Not-for-Profit Entities and ASU No. 2018-08, Clarifying the Scope and Accounting Guidance for Contributions Received and Contributions Made provides specific accounting rules that stipulate how gifts should be classified, recorded and reported upon. Contribution revenue must be classified as either with donor restrictions or without donor restrictions.

And here the parable of the elephant begins. FASB rules present accounting and reporting constraints that are often foreign concepts to a fundraising professional.

The development director is interested in the most successful ways to raise money for the organization and how much money has been raised. Their world is a world of relationships. A fundraiser is tasked with raising money for both the general operating fund as well as specific programs, and so keeps a keen eye on donor intent to know when to ask whom for what. A primary metric is reporting on how contributions have been generated and the relative effectiveness of those strategies. Terminology such as “campaign” and “appeal” and “fund” are used to describe fundraising initiatives and what program they’re raising money for.

Two common development strategies are pledges, where a donor pledges to pay a certain amount of money over time, and grants from private, corporate and governmental organizations.

Nonprofit accounting guidance essentially puts constraints upon the recording of pledges, grants and those gifts a donor intends for a specific program. Accounting must abide by the FASB regulations, which require that an unconditional pledge is recorded in its entirety at the time of the pledge. A similar logic is used for grants.

None of these restrictions exist for a fundraiser. And this is a primary reason that fundraising and accounting reports don’t align.

Accounting, on the other hand, will record the pledge in its entirety at the time that the pledge has been made. So their contribution report will show $50,000 immediately.

Since fundraising and accounting often use different databases, the reports will reflect the elephant’s trunk or its tail, leaving executive leadership confused about the financial status of their organization.

Restrictions in a Nutshell

All contributions to an organization fall into two buckets: with or without donor restrictions.

Bucket 2: Without donor restricted contributions consist of all other revenue without donor constraints. A donor just sends in a check and the money can be spent where it is most needed.

Last, there is an accounting process called “release from restriction,” a process by which restricted monies are released into the without donor restriction “bucket” when a donor-imposed restriction has been satisfied, such as when a program expense occurs. The statement of financial position (balance sheet) and the statement of activities (income statement) are two financial reports that can confuse readers—including board members and fundraisers—because they categorize both restrictions and the movement of money into different buckets, so as money shifts from bucket to bucket the numbers can look very different than dollars raised on a basic fundraising report. 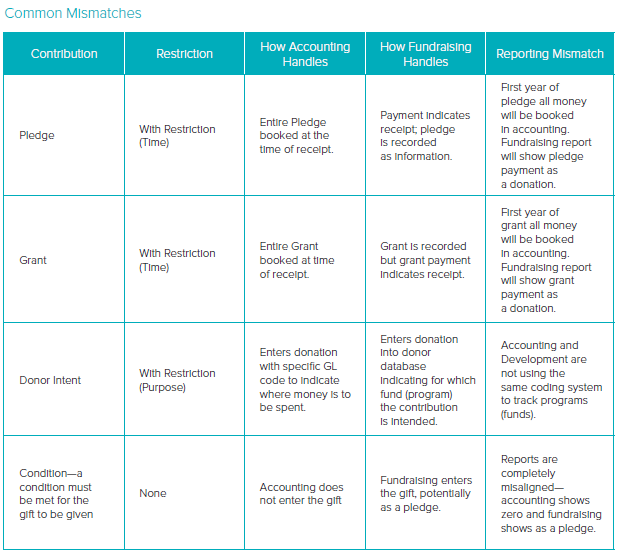 How to See the Whole Elephant in the Board Room

Fundraisers can educate financial staff members as to the campaign and appeal strategies that help them build relationships and revenue. Fundraising software has standardized reports that development officers may assume that others understand, and these reports give another angle on the financial health of an organization.

This is the belly of the beast. Apart from the organic differences introduced by FASB accounting rules, there are a handful of day-to-day operational checkpoints that if missed, will introduce differences in reporting that in effect, are mistakes.

The chart of accounts is the primary organizing tool for getting money put in the right buckets. Fundraising software uses the term “fund,” which is where money is being designated such as a specific program. An accounting software system may refer to “fund” as the restriction type. For reports to line up, both fundraising and finance staff need to be using the same chart of accounts structure for the fund designation. This may seem obvious, but in many cases, it isn’t. Aligning the chart of account is an ongoing process because programs come and go, software comes and goes, and people within the organization come and go.

The gift entry process is the heart and soul of nonprofit operations. Assuming here that the development team enters gifts into their fundraising database and accounting staff enters information into their accounting software, double entry occurs.

For reports to match, it’s critical that a system is put in place to reconcile gifts between both software solutions. For this purpose, a “batch” system is recommended where gifts are entered individually by the fundraising team using the shared chart of accounts code for the fund (designation or program). At the end of the data entry, a batch report is exported from the fundraising software with the batch number and total gift amount, organized by the chart of account code. The accounting system will use the batch number and chart of account code to create a journal entry for the gift amount total. Special attention must be made to pledges, pledge payments, grants, grant payments and stock gifts as they have specialized accounting rules constraining their entry.

Using this method, reconciliation between systems can be done on a daily, weekly or monthly basis, which will identify errors and maintain the data hygiene needed for accurate reporting.

When the fundraising and finance teams are aligned on data entry operations, they can build reports that play on each other’s strengths rather than weaknesses.

Fundraising software is designed to create summaries of campaign strategies, top donor reports and an overall picture of strategy strengths. The goal in fundraising reporting is to build confidence in the initiatives being used to generate funds and the potential contributions in the pipeline.

The finance team understands accounting rules and is in the best position to explain how accounting rules will affect numbers reported by finance versus fundraising. Specifically, by collaborating ahead of time on how restricted contributions such as pledges and grants will be reported upon, with prepared notes explaining differences, the board and executive leadership will leave the meeting with a clear picture of the organization’s financial health.

Remember the parable of the blind men and the elephant: finance and fundraising are describing two different parts of the elephant. Give the fundraiser the “glory of the donor story” and leave the detailed accounting explanations to finance.

Our team has a deep bench of CPAs and consultants with expertise in both the nonprofit sector and NetSuite software. If you’d like to learn whether NetSuite could be a fit for your nonprofit, contact us online or give us a call at 410.685.5512 to schedule a demo.